Skip to content
Parish and Monastery Discount Program Click here to learn more
Article by:
'The Catalogue of St Elisabeth Convent',
we are privileged to present to you this truly insightful article that teaches us about the various symbols found in Iconography and their meanings.
Enjoy!
11 minute read. 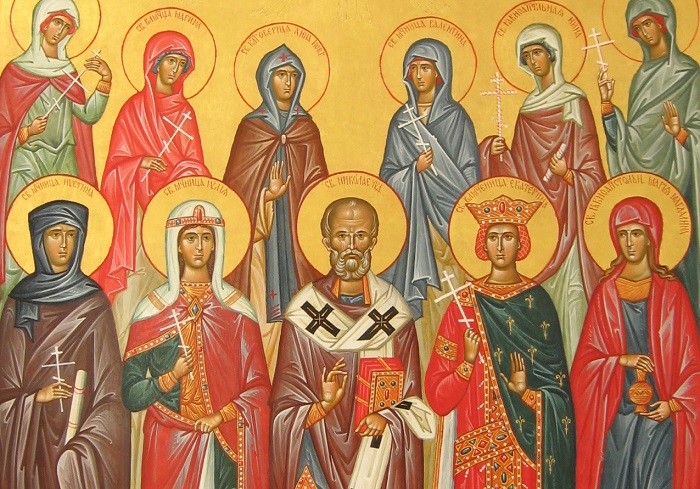 Iconography can be an extremely concise way of communicating the Faith. Therefore, what the Saints hold in their hands in portrait icons help in identifying them and in telling us about their lives. I hope to show that what is held in the hands of the Saints in Icons is their instrument of Salvation; i.e. the “tools” by which God saved and glorified these people. 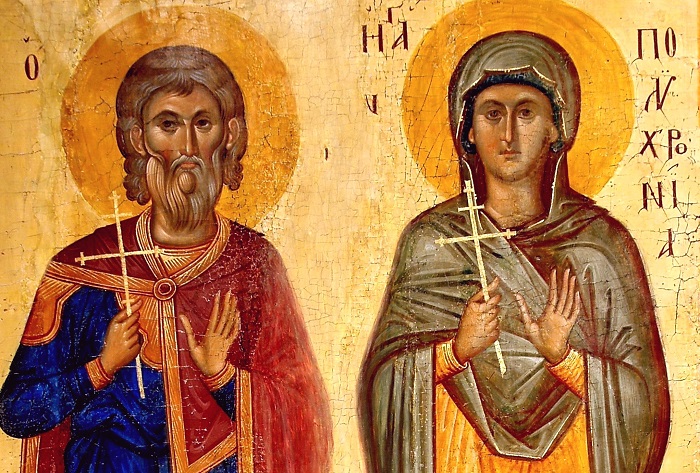 First, a Cross, which indicates the Saint is a Holy Martyr. The reason martyrs are shown holding a cross is two-fold: firstly, martyr comes for the Greek for witness, and so these witnesses hold the preeminent symbol of Christianity: the Cross. Secondly, the Cross symbolizes the most perfect sacrifice of life for others, Christ’s own crucifixion. Therefore, any Saints who were murdered for confessing the Faith are shown with crosses, regardless of how they died. The manner of a Saint’s execution is not how they gained Sainthood. Multitudes of people suffer horribly each day, and die in all sorts of gruesome ways and yet are not called Saints or martyrs for it. It is the confession of Faith that counts, and so those who confessed Christ and died for it hold a cross to mark their martyrdom. Saints holding the instruments of their execution are more common in Renaissance-era art of Europe, but this, I suggest, reflects a preoccupation with the earthly life, rather than eternal heavenly reality. Orthodox Icons may sometimes show the martyrdom itself, but portrait Icons are “windows into Heaven”, and so the Saints are not shown burdened by the things which killed them.

A Scroll indicates holy Wisdom, and so is often shown in the hands of the Old Testament prophets, but is also commonly seen in the hands of the Apostles. Both were given wisdom from God – the prophets through visions, the Apostles through meeting and knowing Jesus Christ. Later Saints may also be shown holding scrolls if they were also known for prophecy, percipience,  and imparting divine knowledge to others. One example is Ephrem the Syrian (right), a hymnographer and deacon from the 4th century well-known for his poetic works of theology. Where the scrolls are unfurled, quotes from the Saints’ own writings are shown. At first this may seem as though the Saints are being glorified for their own “works”. However, it is precisely because these Saints’ writing/wisdom/prophecy is believed to come from God, not their own reasoning, that they are glorified. This is clear when we see, for example, the Prophet Isaiah holding a scroll which bears the words: “Hear, O Heavens, and give ear O Earth” (Is. 1:2). These words are “Isaiah’s”, but are also the words of God spoken through his prophet. It’s the same for later Saints who are shown holding scrolls bearing the words they were inspired to write. 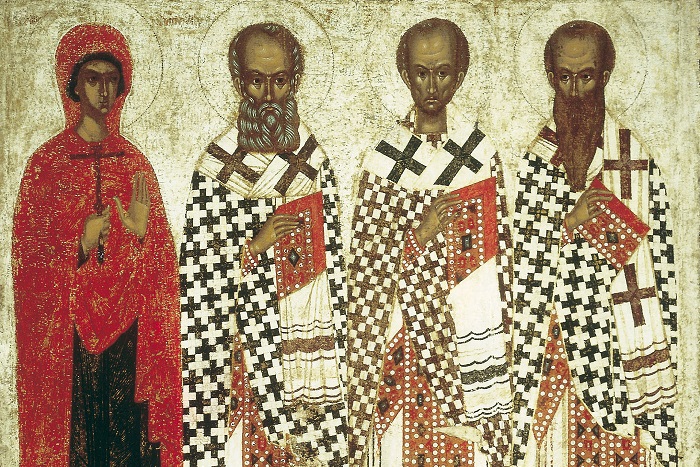 In the New Testament we read of the Apostles, especially Paul, appointing overseers (Gr. episkopos) to guide the new Christian communities, keeping them strong within the faith. It is these overseers which over a generation become the bishops we know today. It is fitting therefore, that Sainted Bishops in Icons hold their main tool: the Gospel Book, from which they proclaim the Good News to the faithful during the Liturgy. Many of the Church Fathers were also Bishops, and some of their “writings” which we read today were not writings at all, but sermons preached after the reading of the Gospel, later copied down by the congregation for other churches to benefit from. Their inspired teachings were grounded in the Gospel, and so they hold these books in Icons as the instruments through which God granted them sainthood. And they hold them with great reverence indeed, indicated by the way some Icons show the Bishops covering their bare hand with their vestments or stole. It is this supreme respect for the Gospel which inspired the Bishops to defend the Faith so vehemently at the Ecumenical Councils, another way in which some went on to be recognized as Saints. Naturally, the Evangelists are also depicted in Icons holding a Gospel Book, often open and in the same way as scrolls they bear the words they penned. 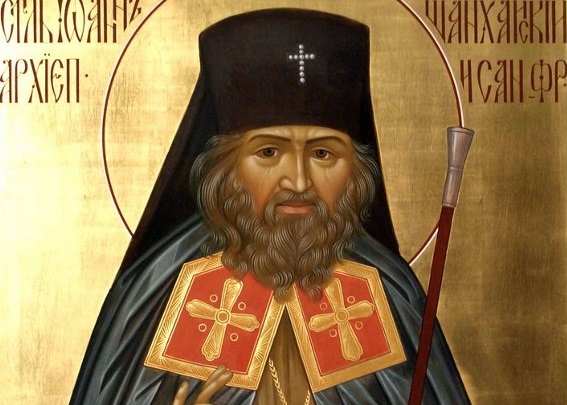 Another role of the Bishop is that of a pastor, or shepherd, of Christ’s flock. This is symbolized by the Crosier, which in Orthodoxy doesn’t look the same as the “shepherd’s crook” held by bishops in the West. It is of a simpler design, usually in the shape of the Greek letter Tau, which symbolizes life, resurrection, or the Cross (more on the symbolism of Tau here). Sometimes the crosier will be topped by a cross, just above a double crook. This double crook is sometimes in the shape of serpents’ heads, symbolizing the serpent lifted up by Moses in the wilderness. Which design of crosier used in an Icon is largely dependent upon the actual design used in life by the Saint in question. 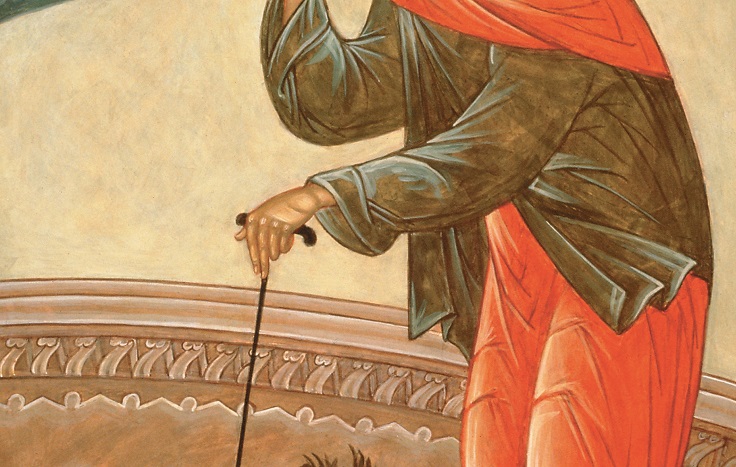 The Tau-shaped crosier is also a symbol of authority held by abbots or abbesses of monasteries, and so icons of monastic saints may also show them holding this kind of staff if they were known for shepherding the faithful. On occasion, a Saint who wasn’t a bishop, abbot, or abbess in life will be shown holding a crosier in iconography. This in recognition of their spiritual authority, regardless of any office they achieved during their lives. A perfect example of this is St. Xenia of Petersburg, a homeless wanderer who through her life of renunciation “taught us to disregard the flesh for it passes away” (hymn to St Xenia). Because of her wanderings she is shown in iconography with a walking stick, yet in some icons this is rendered as a Tau-shaped crosier, as in this Russian icon. The walking stick is an image of St Xenia’s earthly life, but it has been given a new meaning to reflect her heavenly role in the life of the Church. 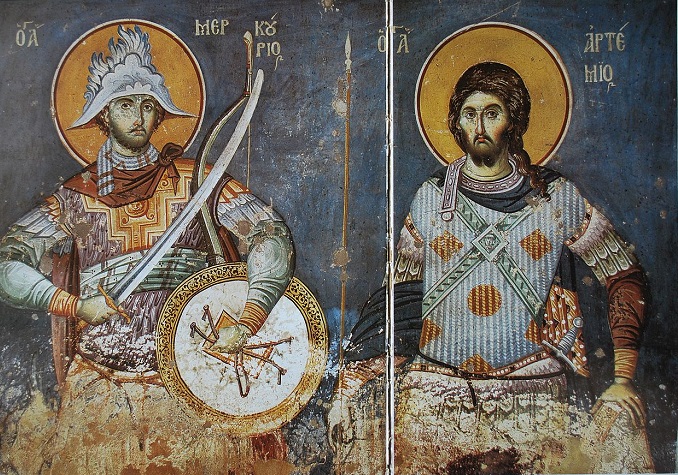 This leads us to Weapons in icons, such as lances, shields and swords. In the first few centuries of the Church, two types of martyr gained particular devotion among Christians: virgin-martyrs and soldier-martyrs. The latter group were typically soldiers in the pagan Roman Empire who converted to Christianity and were murdered because of it. Often their conversion meant they renounced their military lives which makes their appearance in icons garbed in full armour seem strange, almost contradictory. However, if we think about St Xenia’s walking stick “transfigured” into a crosier in icons of her then things become clearer. These martyr-soldiers (and they usually hold crosses too, in remembrance of their sacrifice) have through their confession of faith become “soldiers for Christ”. As our intercessors in Heaven it is comforting, I believe, to know that there are saints warring against the “principalities of darkness” on our behalf. It is therefore natural to show those already courageous soldiers who renounced earthly weapons to even more courageously embrace death now adorned with the armour of God (Eph. 6:11-18). 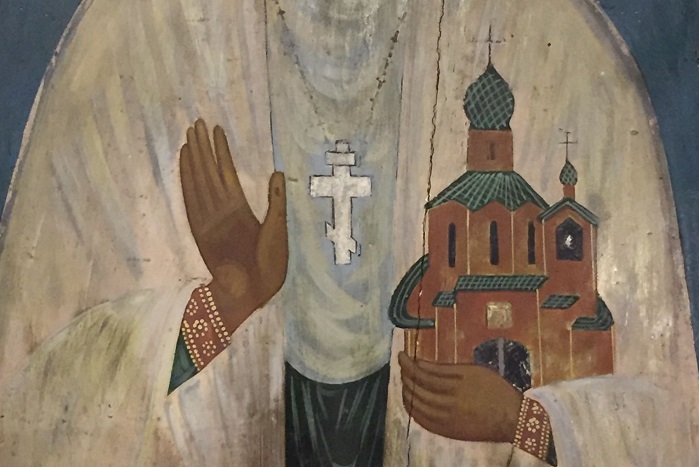 Ss Peter and Paul are sometimes depicted together in a single Icon (they also share a feast day: June 29) and when they do they are shown together supporting a small Church Building in their hands (left). This reflects the hymnography of the Church, where the two Apostles are praised as “pillars of the Church.” Not only were they pillars of the Church, but church-builders too, establishing Christian communities (churches) around the Mediterranean and Holy Lands.
Later, other Saints are remembered for their “church-building” and so are depicted holding small churches or monasteries, often in profile, shown offering the church to Christ (like the second icon of St Edwin on this page).  It is quite common for Sainted kings and queens to be shown holding churches in this way, as they are honoured for their role as protector and benefactor of the Church within their lands. It is through the building up of the church that these monarchs were glorified by God, and so these buildings are the instruments of their own salvation. 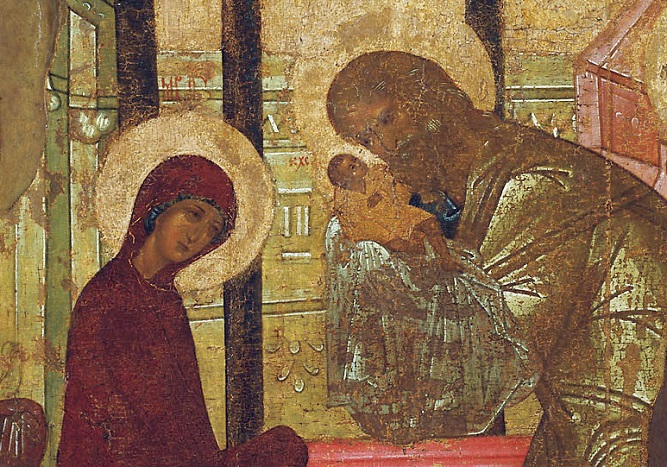 And then there is Jesus Christ Himself. It’s probably impious of me to refer to the Infant Christ as a “tool” of Salvation, but given the above there is much sense in seeing Mary holding Christ in the same way a holy heirarch holds a Gospel Book. The reason Christians do not chase after martyrdom is because it is not something that is sought after, but something accepted if God wills it. The martyr, the holy heirarch, the prophet, and the warrior-saint are all chosen by God to fulfill their roles, for the benefit of all. Individual Saints do not choose whether to be a wise hermit, a virgin-martyr, or an evangelist; their choice is simply to accept the role God ordained for them, or to go their own way.
And so when Archangel Gabriel delivered to the virgin Mary news that God had chosen her to be the mother of the world’s Saviour, she had the choice to accept this, or to run away. By humbly saying “be it to me according to your word”, Mary would be forevermore called full of Grace. Therefore, in most icons of her, Mary is shown holding the Infant Christ, through Whom she was glorified as the Birth-Giver (Theotokos) and Mother of God.
For the same reason as the Mother of God holds Christ in her hands, it is also right for icons of Simeon the God-Receiver to show him holding Christ. By the same reasoning it is inappropriate to show Joseph of Nazareth holding Christ. Joseph was the man betrothed to Mary, who protected her and Christ during Herod’s persecutions, and to most people was considered Jesus’ father. But he wasn’t, and is not acclaimed a Saint for being Jesus’ father. He is a saint for being the Betrothed of Mary, for protecting her and not breaking off the betrothal for infidelity. Where portrait Icons of Joseph exist (and they’re not that common) he’s usually shown holding two doves, the poor-man’s sacrifice he offered at Christ’s Presentation at the Temple (Luke 2:22–40).
There are other objects not mentioned here which are held by Saints in their “heavenly portraits”. The reasons for each object are different, but the principal is the same: the Saints hold the tools of their Salvation. The sheer number of different items depicted in Icons show us the diversity of ways in which God calls us. The Cross, the Gospel, holy Wisdom, the Church: all ultimately lead to Christ, of course, yet the richness of items points to the abundance of His Mercy and Grace.
Citation:
Catalogue of Saint Elisabeth Convent
Back to Spiritual Learning

We are constantly working to produce new products of all the Saints. Sign up for monthly updates on new product releases and 'Spiritual Learnings'. We hope you will join us!

May the Lord Bless and Keep You!